To share your memory on the wall of Albert Chiappinelli, sign in using one of the following options:

Provide comfort for the family of Albert Chiappinelli with a meaningful gesture of sympathy.

Albert Chiappinelli, 94 of Belleville, passed away on Friday October 4, 2019 at his home. Born in Newark, he was the son of the late Giuseppe and Ida (Venedemia) Chi... Read More
Devoted husband, beloved father & grandfather, Bronze Star recipient

Albert Chiappinelli, 94 of Belleville, passed away on Friday October 4, 2019 at his home. Born in Newark, he was the son of the late Giuseppe and Ida (Venedemia) Chiappinelli. Mr. Chiappinelli was a manager with Wallace & Tiernan Inc. in Belleville before retiring. He was a U.S. Army veteran of World War II, serving in the Pacific Theater as a machine gun crew commander. He was awarded the Bronze Star for meritorious service in ground combat, the Asiatic Pacific Campaign Ribbon with 4 bronze battle stars and the Philippine Liberation ribbon with bronze arrowhead. He was also a member and past commander of the Italian American War Veterans and was a member of the Belleville VFW.

A Funeral Mass will be celebrated at St. Anthony of Padua Church, Belleville at 10:30 am followed by entombment at Holy Cross Cemetery in North Arlington.

Visitors will be received at the funeral home on Monday from 4-8 pm.

In lieu of flowers, memorial donations may be made to the Phoenix Center (www.thephoenixcenternj.org).
Read Less

To plant a memorial tree in honor of Albert Chiappinelli, please visit our Heartfelt Sympathies Store.

Donations are being accepted for: FRIENDS OF THE PHOENIX CENTER FOUNDATION INC.

We encourage you to share your most beloved memories of Albert here, so that the family and other loved ones can always see it. You can upload cherished photographs, or share your favorite stories, and can even comment on those shared by others.

Posted Oct 06, 2019 at 09:52pm
My memories are many. The Christmases he gave us when we were little will always be cherished. All the lunches and breakfast
Which he loved we enjoyed his stories about the war and his childhood always with humor .
He was loved very much and always be remembered we will miss him. Love always
Lorraine and Dennis Viparina

Posted Oct 05, 2019 at 06:26pm
My dad, Art Gaffney, worked with your father at Wallace & Tiernan. I remember him speaking often of your father in the most glowing terms. He really had such respect for your father. I was so sad to learn of his passing.
Comment Share
Share via:
CH

Posted Oct 05, 2019 at 04:07pm
As my kids would say when they were little, "Oh the uncle with the finger? Uncle Lal" So many wonderful memories of past family holidays and visits. My last connection to my Dad Stanley and grandparents. Rest in peace with Cheryl and all of our family.
Always in my heart I love you. Your niece Connie
Comment Share
Share via: 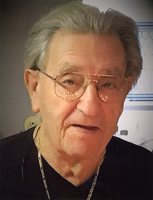