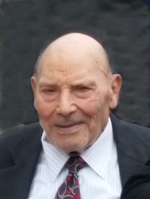 Antonio Pontoriero, known affectionately as “Zio Tonga”, age 90 of Bloomfield, passed away at his home on Friday, August 30, 2019. Born in Spilinga, Italy, he was the son of the late Pasquale and Domenica (Giuliano) Pontoriero. Antonio served in the Italian Army before coming to the United States in 1963. He worked at Port Newark for Wine, Liquor & Distillery Workers Union and then worked for Village Supermarkets. His hobbies included watching soccer, gardening, and making wine.

Antonio is survived by his dear wife of 53 years, Domenica (Rao) Pontoriero; his children, Pasquale Pontoriero and his wife Lorre, and Dr. Donna Pontoriero; his grandchildren, Anthony, Pasquale, and Samantha; and many nieces and nephews whom he adored. He is predeceased by his brothers, Francesco and Giuseppe Pontoriero, and his sisters, Caterina Dotro and Elisabetta Calello.

The Funeral mass will be celebrated at Our Lady of Mount Carmel Church in Newark at 9:30am.

The entombment will follow at Holy Cross Cemetery in North Arlington.

Visitors will be received at the funeral home on Monday from 4-8pm.