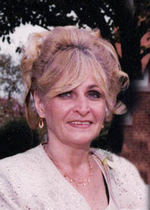 Barbara Ann Momberger, born on October 23rd 1953 passed away, on February 22, 2020 surrounded by loved ones.
Barbara worked for the post office for 10 years and was a lifelong resident of Nutley. She married her longtime friend and love, William Momberger, in 2010, recently deceased in January of 2020. Together they enjoyed trips into New York City, sodas in the park and the company of one another.
Barbara’s time was spent watching true crime television, socializing with her close circle of friends, Carol, Joy and Alice and caring for beloved dog, Nellie.

Barbara has been sent home to rejoin her husband and beloved parents John McDougall and Wilma McDougall.
Barbara is survived by her brother Bruce McDougall and her 3 children. Dennis Kirk and his wife Alycia. Thomas Kirk, her rock, caretaker and confidant. Her daughter Colleen Kirk and her fiancé John Hagen and her two adoring grandchildren Jack and Ryan Kirk.

There will be a Mass of Christian Burial celebrated at St. Thomas the Apostle Church in Bloomfield on Friday, February 28, 2020 at 10 a.m.