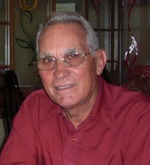 Blas S. Stancic, age 82 of Bloomfield, passed away on Sunday, July 7th, 2019. Born in Oriente, Cuba, Blas lived in Newark before coming to Bloomfield 8 years ago. He was the son of the late Miguel and Ana (Espinosa) Stancic. Blas was a painter for Bayonne & Barrel Drum Co. in Bayonne.

He is survived by his wife, Maria C. (Alvarez) Stancic; daughter, Zuzel Rodriguez and her husband Carlos; sister, Isa Stancic; and his grandchildren, Briana Rodriguez and Adam Rodriguez. Blas is predeceased by his brother Carlos Stancic.

Relatives and Friends will be received at the S.W. Brown & Son Funeral Home, 267 Centre St. Nutley, on Saturday, July 13th from 9am to 11am.

A Funeral Mass will be celebrated at 11:30am at St. Peter’s Church in Belleville.

The cremation service will be private.