To share your memory on the wall of Charles Fanelli, sign in using one of the following options:

Provide comfort for the family of Charles Fanelli with a meaningful gesture of sympathy.

Charles Fanelli, of Nutley passed away on Saturday, November 2, 2019. Born in Newark, the son of Angelo and Lena (Ferrara) Fanelli, he lived in Belleville prior to moving to Nutley 47 years ago.
Charlie... Read More
Owner of East Nutley Garage

Charles Fanelli, of Nutley passed away on Saturday, November 2, 2019. Born in Newark, the son of Angelo and Lena (Ferrara) Fanelli, he lived in Belleville prior to moving to Nutley 47 years ago.
Charlie was the owner of East Nutley Garage for 53 years before retiring 14 years ago. He also towed for the Nutley Police Department. He was also a proud Army Veteran of the Korean War, a member of the Nutley Old Guard and the Nutley Elks BPOE #1290.

To plant a memorial tree in honor of Charles Fanelli, please visit our Heartfelt Sympathies Store.

Posted Nov 05, 2019 at 08:49pm
I will forever remember the love and kindness Uncle Charlie always showed towards me. I will miss him greatly. Love always, April.
Comment Share
Share via:
ED

Posted Nov 05, 2019 at 08:45pm
Condolences to the family, I work with Frank in Toms River and am saddened by the loss. GOD BLESS The Fanelli Family.
Emilio Diana

Posted Nov 05, 2019 at 12:36am
I remember how you always walked with grandma in the park and you wanted no guys to speak to her. If they did, you would get so jealous. You would always say the guys were flirting with her. You always told us, that she was 16 when you met and you wanted to marry her.
Love, Brittney
Comment Share
Share via:
CS

Posted Nov 04, 2019 at 07:48pm
We will miss you Grandpa! You had a wonderful marriage with Grandma, one that is so rare to have. We will always remember you dancing at our wedding and being Jimmy’s confirmation sponsor in the Catholic church. All the memories we had with you we truly cherish. You were an amazing grandfather to us and we are so thankful that you were such a big part of our life. You will be in our hearts forever!

Posted Nov 04, 2019 at 07:37pm
My grandfather loved his family and friends unconditionally. He cared about the well being of others more than himself. I remember always going over to my grandparents' house to watch sports. My grandmother was a hardcore fan of the Pittsburgh sports teams, because she grew up in Pittsburgh. On the other hand, my grandfather was not a big fan as he did not know all the players or all the rules. However, because he knew that his wife was such as big fan, he continued to watch games and support her every night, because he loved her and wanted to be involved with every aspect of her life. This is one of many instances which symbolizes the true love he felt for her, and I always admired that about him.
I remember during high school when I used to play baseball, both my grandparents would always come to nearly all my games. They were always there for moral support. This made me always want to perform at my best and make them proud. When my grandfather came over my house he would always watch me play basketball out in the backyard. Because of this, he would always give me a new basketball for Christmas, which I always looked forward to getting. We would both joke every year about the gift, as if we didn't know what it was. My grandfather was a very religious man, and I know at this moment that he is in heaven, and finally at peace. Thank you for everything, I always looked up to you, and I know you will continue to watch over me.
Ryan Borgo 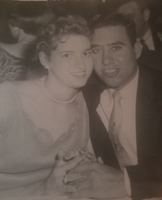