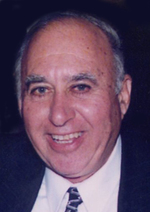 Charles Fanelli, of Nutley passed away on Saturday, November 2, 2019. Born in Newark, the son of Angelo and Lena (Ferrara) Fanelli, he lived in Belleville prior to moving to Nutley 47 years ago.
Charlie was the owner of East Nutley Garage for 53 years before retiring 14 years ago. He also towed for the Nutley Police Department. He was also a proud Army Veteran of the Korean War, a member of the Nutley Old Guard and the Nutley Elks BPOE #1290.