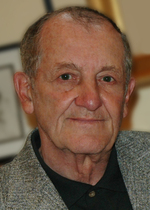 Charles C. Molinaro, 88, a lifelong resident of Belleville, passed away on Friday April 16, 2021 at his home. Charles was the son of the late Pompey and Carmella (Cefalu) Molinaro. Mr. Molinaro was the owner of U.S. Shoe Repair in Montclair for 40 years before retiring and was a U.S. Navy veteran of the Korean War. He was also an avid golfer, playing often at Hendricks Field in Belleville. Charles is survived by his beloved wife, Marie (Vara) Molinaro, his daughter, Christine Palma and husband, Anthony and his granddaughters, Deanna and Sabrina Palma.

A Funeral Mass will be celebrated at Holy Family Church, Nutley on Wednesday at 10:30 am.

Cremation and committal at Holy Cross Cemetery in North Arlington will be private.

In lieu of flowers, memorial donations may be made to the Alzheimer’s Association (www.alznj.org)