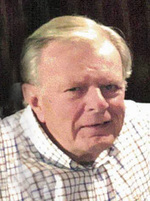 David H, Williamson, 74 of Upper Montclair, passed away on Saturday, July 06, 2019 at his home. Born in Newark, the son of the late Harry and Madeline (Stricker) Williamson, he was a resident of Nutley prior to moving to Upper Montclair 28 years ago.
He retired as the president of Viacom Realty Corporation in New York City and was a long time member of the Glen Ridge Country Club and Vincent United Methodist Church in Nutley. David was also an Army Veteran of the Vietnam War.

The Funeral service will be celebrated on Wednesday, July 10, 2019 at Vincent United Methodist Church, 100 Vincent Place in Nutley at 10 a.m.

The interment will follow at Mount Hebron Cemetery in Upper Montclair.

In lieu of flowers, memorial contributions to Vincent United Methodist Church, 100 Vincent Place in Nutley, NJ 07110 would be preferred.