Obituary for Dorothy I. Spera (George) 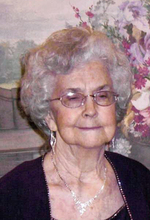 Dorothy I. Spera, 88 of Clifton passed away on Friday, August 16, 2019. Born in Scranton, PA, the daughter of Thomas and Irene (Decker) George, she lived in Pennsylvania and Belleville prior to moving to Clifton 10 years ago.

The beloved wife of the late Paul Spera, she is survived by her children, Deborah Walsifer, Bernadette Lipoma, Lisa Helminski and Ronald, Leonard and Robin Spera; 12 grandchildren; 9 great grandchildren; her sisters, Lee Kane and Margaretta Williams and her brothers, Evan and Eugene George. Along with her parents, Dorothy was predeceased by her brother, Louis George.

The Funeral Mass will be celebrated at St. Peter’s Church in Belleville at 11 a.m.

Visitors will be received at the funeral home on Monday from 5-8 p.m.