To share your memory on the wall of Fiore Michael Pucci, sign in using one of the following options:

Print
Fiore Michael Pucci passed away on Sunday, September 6th, at the age of 80.

Born in Newark, New Jersey on July 22, 1940, Pucci was raised in a humble home with two loving parents, Carmella and Fiore and two cherished sisters, Margaret an... Read More
Fiore Michael Pucci passed away on Sunday, September 6th, at the age of 80.

Born in Newark, New Jersey on July 22, 1940, Pucci was raised in a humble home with two loving parents, Carmella and Fiore and two cherished sisters, Margaret and Jennifer. His zeal for living life to the fullest started at a young age when he’d dance with his sisters to Dion and the Belmonts and join their nine uncles and four aunts in song at family occasions.

He graduated from Nutley High School, where he groomed his fast reactions on the football field, was captain of the basketball team, selected to attend “Boys State” and voted “The Biggest Flirt”. Pucci was a pioneer in his family, being the first grandchild to go to college. He ventured out west in 1958 to Colorado after receiving a college football scholarship to University of Denver.

It was in Denver where he met and married his college sweetheart, Nancy Bartoli and they welcomed their first child, John, into the world. Pucci was always passionate about his work and ambitiously moved, working his way back east, to progress his career settling down in Wyoming, Chicago, Michigan, New Jersey, Connecticut and Maryland. And, during this journey, he and Nancy welcomed their daughter, Jacqueline, to the world.

Pucci spent 50 years in the architectural metal and glass construction industry, rising to President and running his own successful consulting business in his later years. He was a charismatic leader, but also a tough negotiator, achieving great success in his career.

Pucci has been described as being “larger than life, a gifted storyteller, a man with a wickedly keen sense of humor, the one to sit next to (because he asked the kinds of questions that made one feel interesting and important), a healthy debater (even if he agreed with you), a wine enthusiast, Italian aficionado, Sinatra-singer, a well-meaning mentor, and a gentleman….one of the last of the great ones.”


Despite his drive and ambition, his greatest pride and joy was his family. He said many times, how extremely fortunate he was to have found true love twice with two wonderful women in his life. After losing his first wife in 1983, friends introduced him to Lydia in 1985. They married in 1986. Fiore (also known as Mike) and Lydia worked hard to merge two families into one, through special times spent at the beach, singing on cue, trips around the world, hosting delectable dinner parties and winning wine tastings at their home, dining out at his favorite Italian hot spots where everybody knew his name, and home-cooked Italian meals back at his mother’s.

His body of work and memories of the many lives he touched will endure forever.

Receive notifications about information and event scheduling for Fiore Michael

We encourage you to share your most beloved memories of Fiore Michael here, so that the family and other loved ones can always see it. You can upload cherished photographs, or share your favorite stories, and can even comment on those shared by others. 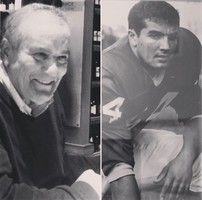