To share your memory on the wall of Frank DeLorenzo, sign in using one of the following options:

Provide comfort for the family of Frank DeLorenzo with a meaningful gesture of sympathy.

Frank A. DeLorenzo, 70 of Belleville passed away on Tuesday, October 8, 2019. Born in Newark, the son of Frank A. and Veronica (Trignano) DeLorenzo he was a lifelong resident of Belleville.
Frank retired from ... Read More
Retired Bus Driver

Frank A. DeLorenzo, 70 of Belleville passed away on Tuesday, October 8, 2019. Born in Newark, the son of Frank A. and Veronica (Trignano) DeLorenzo he was a lifelong resident of Belleville.
Frank retired from the Belleville Board of Education as a bus driver and previously worked at the Meadowlands Sports Complex. .

Visitors will be received at the funeral home on Monday from 4-8 p.m.
Read Less

To plant a memorial tree in honor of Frank A. DeLorenzo, please visit our Heartfelt Sympathies Store.

We encourage you to share your most beloved memories of Frank here, so that the family and other loved ones can always see it. You can upload cherished photographs, or share your favorite stories, and can even comment on those shared by others.

Posted Oct 10, 2019 at 11:48pm
You were my big brother and although at times we may have argued like all siblings do, I always loved you. I will always remember our vacations in Florida, a place you loved so much. Now you are truly in Paradise and you are no longer suffering. Although we will all miss you so much, I find peace knowing you are no longer in pain. Rebel ( the little man) loved you so much and every time the front door opens he runs to see if it’s you. He still sits in the window waiting for you to come home. He misses you so much. He actually lost weight since you have not been around to feed him treats! Haha. Mia also misses you like crazy. And she loved you so much. Mommy will be lost without you but we will take good care of her. She looks at your chair and can’t believe you’re not sitting in it complaining about watching the Virginian. And yelling at her for falling asleep. I promise you we will keep your spirit alive by talking and laughing about the funny things you would say and do. Until we meet again my big brother, REST IN PEACE. Give daddy a hug and kiss from me. Tell him we all miss him too. I just can’t believe you are gone but will never be forgotten and will always be loved!!
Laura xoxo
Comment Share
Share via:

I am so sorry for your loss. I just found out of your brother's passing today. I worked with Frank at the board of ed and also the racing commission. My condolences to you and your family. He was one of a kind and he will be missed. RIP Frank.
MH

Posted Oct 10, 2019 at 01:33pm
There are good ships and there are wood ships. The ships that sail the sea.But the best ships are friendships, and may they always be. Gonna Miss you Frankie !
You gained your heavenly wings. Fly in the heavens with the Lord forever. 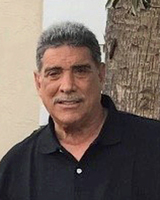