To share your memory on the wall of Frank Stefanelli, sign in using one of the following options:

Provide comfort for the family of Frank Stefanelli with a meaningful gesture of sympathy.

Frank A. Stefanelli, III, 84 of Belleville passed away on Thursday, September 5, 2019. Born in Newark, the son of Frank A. and Mary (Fullman) Stefanelli, he lived in Nutley prior ... Read More
Loving Husband, Father, Grandfather & Great-Grandfather

Frank A. Stefanelli, III, 84 of Belleville passed away on Thursday, September 5, 2019. Born in Newark, the son of Frank A. and Mary (Fullman) Stefanelli, he lived in Nutley prior to moving to Belleville 59 years ago.
Prior to his retirement, he was a partner in Frank Stefanelli Trucking in Wallington. An avid golfer and very loving and giving person, he was a Veteran of the U.S. Navy and a member of the North Arlington Knights of Columbus, Elks BPOE #1992 and Columbian Club.

The Funeral Mass will be celebrated at St. Mary’s Church in Nutley at 10:45 a.m.

The entombment will follow at Holy Cross Cemetery in No. Arlington.

Visitors will be received at the funeral home on Sunday from 2-6 p.m.

To plant a memorial tree in honor of Frank A. Stefanelli III, please visit our Heartfelt Sympathies Store.

Receive notifications about information and event scheduling for Frank

We encourage you to share your most beloved memories of Frank here, so that the family and other loved ones can always see it. You can upload cherished photographs, or share your favorite stories, and can even comment on those shared by others.

Posted Sep 07, 2019 at 11:00am
To a tremendous husband, father, grandfather and friend. We all will miss you Frank. Rest peacefully. Love, Cory and Marissa.

Flowers were purchased for the family of Frank Stefanelli. 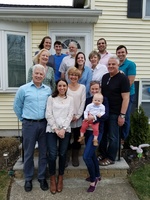