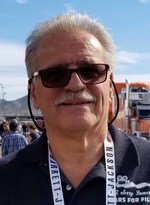 Gerard F. Immersi, 64 of Caldwell, passed away on Wednesday August 28, 2019. Born in Newark, he was the son of the late Frank and Caroline (Sisti) Immersi. Gerard lived in Belleville before coming to Caldwell 30 years ago. Mr. Immersi was the owner of Cars for Films Inc. in Newark, a company that provides period accurate vehicles for motion picture and television. He was a member of the Screen Actors Guild and also numerous classic car organizations.

Predeceased by his son, Gerard, Jr. he is survived by his beloved wife, Donna (Abagnale) Immersi and his daughter Gabrielle Immersi. He was the dear brother of Frank Immersi, Patricia Sargo, Carla Brandt and the late Elizabeth Immersi and also leaves his mother-in-law and father-in-law, Joan and Emil Abagnale and many loving nieces and nephews.

Visitors will be received on Saturday August 31 from 2-8 pm at the S.W. Brown & Son Funeral Home, 267 Centre St. Nutley.

The funeral service will conducted at the funeral home Saturday evening at 7:15 pm.

Entombment will follow at Glendale Cemetery on Tuesday September 3 at 10 am.