To share your memory on the wall of James Di Giovanna, sign in using one of the following options:

James H. Di Giovanna, Sr., 95 passed away on Sunday, December 22, 2019. Born in Newark to the late Harold and Hazel (Kendall) Di Giovanna, he lived in Nutley then moved to Toms River for 25 years be... Read More
Loving Husband, Father and Grandfather

James H. Di Giovanna, Sr., 95 passed away on Sunday, December 22, 2019. Born in Newark to the late Harold and Hazel (Kendall) Di Giovanna, he lived in Nutley then moved to Toms River for 25 years before moving to Mount Arlington 7 years ago. James was a proud U.S. Army Veteran serving in World War II. After his honorable discharge he became a Nutley Police Officer and later became an Essex County Corrections Officer. James was a lifelong member Police Benevolent Association.

The Funeral Mass will be celebrated at 10:30 a.m. at Holy Family Church in Nutley.

The interment will follow at Northern New Jersey Veterans Memorial Cemetery in Sparta.

Visitors will be received at the funeral home on Thursday, December 26, 2019 from 4-8 p.m.
Read Less

We encourage you to share your most beloved memories of James here, so that the family and other loved ones can always see it. You can upload cherished photographs, or share your favorite stories, and can even comment on those shared by others.

Posted Dec 25, 2019 at 12:30pm
The loss of my Pops leaves my heart so very heavy. I've been doing my best to smile like he would and keep plugging along like he would want me to. My heart may be heavy and there are tears that come and go throughout the days, but I am comforted by the fact he lived 95 truly amazing years. Not many can say at 39 years old they still have their grandparents in their life. I was so very blessed! Most of all, Pops enjoyed my Luci for 9+ years. Boy did he love his dolly! He raised 3 children, loved 9 grandchildren, and cherished 12 great grandchildren. He left high school to join the army during WW2. Then went back to high school at 21 years old where he met my grandmother. Saturday December 14th they were married 72 years. 72 years! What an incredible life he had. I'm going to miss him terribly.

I have so many wonderful memories. I spent hours with him teaching me how to drive. The man had the patience of a saint.

When Chris and I began dating, Chris tried to pick me up without coming to the door. I was going to run out the door and into his car. Nope. Pops blocked the door and refused to let me leave until Chris came in and shook his hand ... a very firm handshake.

The day I got married he was so proud. His job - assigned to him by himself - was to take care of my la borsa. He hid my la borsa under his chair. He did not move the entire night. He was all about protecting that bag. He didn't go to the bathroom and had everyone bring him desserts from the Viennese room. Anyone who knew Pops knew he loved his sweets. His grandchildren and great grandchildren were his "sweet" fetchers.

When I was pregnant with Luci, he was my babysitter. Often sitting with me, reading his newspaper, or working on a crossword puzzle "supervising" that I was behaving and following doctor's orders. When I had to go for the 4 hour glucose test I was a bear. He simply sat there reading his paper while I vehemently complained. Everyone once and awhile reminding me, "Babe don't forget we are going for pancakes after this."

When he broke his hip, I showed up at the hospital the morning after his surgery. No hello.I was greeted with "Babe the weather is bad. I taught you to drive. I'm pretty d@mn sure I told you not to drive in bad weather." Followed by a nice visit where I tried to get him to take pain medication which he flat our refused. "Babe I've made it this far without taking goof balls. I'm not getting hooked on them now."

Pops was almost always smiling or making goofy faces with his grandchildren and great grandchild. The picture below is my favorite picture of Luci and him. You can see his admiration and love for Luci radiating through. I will forever hold his smile and "Babe" in my heart. ~ Missy I waited to write this until Christmas Morning, since you always made Christmas a very special time of the year for your wife, children, grandchildren, and great-grandchildren. While you were not with us last evening for our Christmas Eve Celebration, and unfortunately will not be with us for Christmas Day this year, your influences on us will still be remembered.

I can think of no better day than Christmas Day to write about "My Shinning Star". You were the point of light that always guided me. And always performed it in a manner where others were in the spotlight while you remainded in the background requiring nearly no attention.

I will always remember those New Your Rangers Hockey Games (at the old Madison Square Garden), and most iimportantly those Doubleheaders watching our Yankees (Bronx Bombers) play. Ok, so I finally will admit it, "Joe D". was a bit better of a baseball superstar than "The Mick". Ouch that hurt even to write.

When I needed to make a vitally important decision (purchasing a home, taking a new job, etc.) I always consulted you for your input prior to making it. And in your usual manner you supplied me with what you believed was the best option, however always making your opinion and guidance to me in a quiet and private one-on-one manner.

Simply put, you were the best Father a Son could have. By being married for 72 years to Mom, you showed us an example of how to make a marriage work. As such, today, I can only hope to be one-half as good of a Husband, Father and Grandfather as you were.

And how can I forgot those telephone calls when we were a bit of a distance apart? They typically began with: "So Jimmo, how are you, Francine, and the kids"? Once again, fousing on me, my wife, children, and grandchilren and never drawing much attention to yourself.

Yes, you were a part of what is now referred to as "The Greatest Generation". You typically got things done that needed to be done and really never spoke much about those accompishments.

So, all I have left to say right now is Merry Christmas Dad.

Posted Dec 23, 2019 at 03:56pm
Poppop you have always meant the world to me. I will miss you dearly. Be with the angels and watch over us. Love you.
Comment Share
Share via:
JA

So lucky to have had such a wonderful grandfather for 37 years . Plant some tomatoes up there . Love Jessie 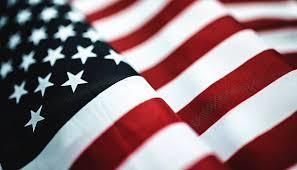 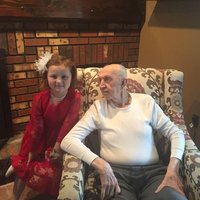 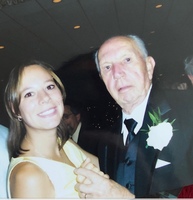