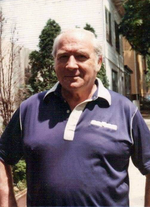 Joseph De Gisi, 100 of West Caldwell passed away on Saturday, August 31, 2019. Born in Newark, the son of Gaetano and Carmella (Rossi) De Gisi, he lived in Newark and Bloomfield prior to moving to West Caldwell 7 years ago. He was a machinist and retired from Acme Plastics in Woodland Park as a foreman.

The beloved husband of the late Edith (Casale) De Gisi, he is survived by his daughters, Carmella Gonnella and Joann De Gisi; his son, Thomas De Gisi and his wife, Joann; 8 grandchildren and 17 great-grandchildren. Along with his parents, he was predeceased by his sisters, Ann De Gisi and Mary Megaro and his brother, Luca De Gisi

The Funeral Mass will be celebrated on Wednesday September 4, 2019 at St. Lucy’s Church in Newark at 12 Noon.