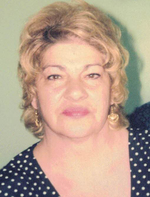 Judith S. Roccosanto, 77 of Bethlehem, PA, passed away on Sunday June 2, 2019. Born in Newark, she was the daughter of the late Frank and Angela (Mancini) Candiloro. Judy lived in Edison, Belleville and Irvington before going to Pennsylvania in 1981 and was a member of the Belleville Elks Lodge #1123. Predeceased by her beloved husband, Joseph Roccocanto and her son, Francis, she is survived by her children, Grace Ann Freeman and her husband, Michael, Donna Marie Roccosanto and her fiancée Major Donald Unangst and Joanne Gass and her fiancée, Michael. She also leave her grandchildren, Mathew Deutsch and wife, Micha, Nicole Roccosanto, Juliette and Ian Gass, Arthur Joseph Gass, Jared Freeman, Paul Freeman and wife, Courtney and Vincent Freeman and a great grandson, Jackson. Judy was the dear sister of Rose Marie Candiloro and Carol Mitchell and husband, Brian.

A Funeral Mass will be celebrated at Our Lady of Mount Carmel Church, Nutley at 11 am.

Cremation will be private. Visitors will be received at the funeral home on Tuesday from 4-7pm.