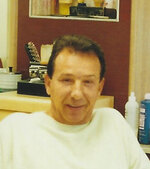 Louis Michael Sette, 77, also known as “Louie The Barber” of West Orange, formerly of Verona, passed away Wednesday, January 6, 2021. Born in Orange, Louis was the son of the late Antoinette (Nittolo) and Joseph Sette. He was self-employed as a barber for 60 years working at Louis Michael’s in Allendale, and Robert’s Barber Shop.

Louis is survived by his beloved wife Genevieve “Jeanne” (Valente) Sette of 47 years. Father to Michael Sette and Nicole Segro and her husband Paul. Brother to Joseph Sette. One of a kind Grandfather aka Poppy to Paul “PJ” Segro and Audriana Sette. Devoted and loving caretaker to his Pit Bulls Pebbles and Diamond. He is also survived by his nieces and nephews Michele Lanza, Cheryl Mayer, Michael and Joseph Sette, Jennifer Algieri, Darrin, Justin, and Kristen Valente.

The funeral mass will be celebrated at Holy Family Church in Nutley at 9:30am.

The interment will follow at Gate of Heaven Cemetery in East Hanover.

Visitors will be received at the funeral home on Sunday, January 10th from 1-4pm.

In lieu of flowers, memorial contributions to American Heart Association or to St. Jude Children’s Research Hospital would be appreciated. Donation links will be down below.