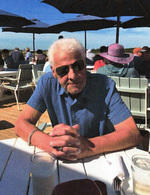 Louis J. Sisbarro, Jr., of Verona passed away on Sunday, August 11, 2019 at his home. Born in Newark, the son of the late Louis and Rose (D’Amico) Sisbarro he was raised in Newark and lived in Belleville and Nutley before moving to Verona 23 years ago. Prior to his retirement, he worked as a Graphic Artist at Warner-Lambert in Morris Plains as well as an Army Veteran. After his retirement, Louis worked as the parts manager for CTC in Caldwell.

The beloved husband of Adrienne (Hahn) Sisbarro, he is survived by his daughter Carolyn De Lorenzo and his two grandchildren Kara and Timothy De Lorenzo. Along with his parents he was predeceased by his sister Katherine Felso and her husband Thomas.

The Funeral Mass will be celebrated at St. Peter’s Church in Belleville at 10 a.m.

Visitors will be received at the funeral home on Thursday from 3-6 p.m.