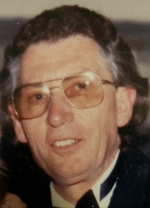 Louis G. Verrico, 83 passed away on Sunday, August 18, 2019. Born in Newark to the late Dominick and Julia (Cocchiola) Verrico, he was a lifelong resident of Nutley. Prior to his retirement he was an audio engineer at CitiVox New York, NY and was an avid motorcycle rider. He was also the lead singer and played the bass guitar in the band Front Page and was a member of The Long Riders Motorcycle Club.

The Funeral Mass will be celebrated on Friday at 10:30 a.m. at Holy Family Church in Nutley.

Visitors will be received at the funeral home on Thursday from 4-8 p.m.

The cremation will be private.

In lieu of flowers, memorial contributions to Autism Speaks, 1060 State Road, Princeton, NJ 08450 would be preferred.