To share your memory on the wall of Margaret Cundari, sign in using one of the following options:

Provide comfort for the family of Margaret Cundari with a meaningful gesture of sympathy.

The oldest of six children, Mrs. Cundari was born in Newark on April 7, 1920. She attended Good Counsel High School in Newark and The Drake Business School. She was married for 62 years to the late August F. Cundari, a World War II veteran and civic leader. He also was an orchestra leader for many years, starting in the swing era of the 1930s and through the 1980s.

She was the administrative assistant to the senior vice president of research at Hoffman-LaRoche for most of her career before retiring in 1990. Prior to that she worked as secretary to the headmaster of St. Benedict’s Preparatory School for 10 years.

A loving and gentle mother, grandmother and great grandmother, she was a devout Catholic and member of the St. Mary’s Rosary Society as well as a Cub Scout den mother in Nutley.

Mrs. Cundari is survived by her sons Richard and his companion, Mary Ward, of Sea Girt and Frank and his wife Marje of Bryson City, North Carolina.

We encourage you to share your most beloved memories of Margaret here, so that the family and other loved ones can always see it. You can upload cherished photographs, or share your favorite stories, and can even comment on those shared by others. 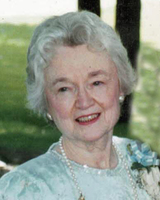