To share your memory on the wall of Margery Lordi, sign in using one of the following options:

Margery was born in Blaengwnfi, Wales, to Ivor and Esther Lewis. She And her sisters Phyllis and Vera were raised in England. During WWII, she met the love of her life, an American soldier named Andy, at a local dance. They were married in August of 1945. Marge came to the U.S. in 1946 as an English war-bride. She soon became an American citizen. Her outgoing personality and desire to serve the public put Marge into many leadership positions: PTA president at Summer Place School in Newark, member of the North Newark Community Council, president of the Rosary Society at St. Peter’s Church in Belleville, President of the Friends of the Belleville Library, President of the Belleville Chapter of the AARP, and Trustee of the Belleville Public Library.


Marge managed the cafeteria at Wallace & Tiernan/Pennwalt in Belleville for many years.

Marge was an amazing cook and baker. Her family and friends enjoyed traditional dishes from England as well as the Italian-American cuisine she learned from Andy’s family. Her English Tea at the Belleville Library became a much-loved annual tradition. She baked and served dozens of cakes, cookies, and tea sandwiches to attendees.

Marge will be greatly missed by her family and friends, as well as the community of Belleville.

Please omit flowers. The family would instead like memorial contributions to be made to the Belleville Public Library, www.bellepl.org/bl/Donate/.
Read Less

To plant a memorial tree in honor of Margery Lordi, please visit our Heartfelt Sympathies Store.

Receive notifications about information and event scheduling for Margery

We encourage you to share your most beloved memories of Margery here, so that the family and other loved ones can always see it. You can upload cherished photographs, or share your favorite stories, and can even comment on those shared by others.

Posted May 11, 2020 at 11:11am
On behalf of the Board of Trustees of the Belleville Public Library, I would like to express our most sincere sadness at the passing of your mother. 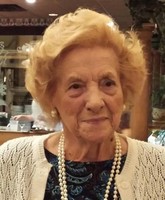