Obituary for Maria A. Romano (Fabiano) 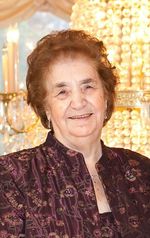 Maria A. Romano, 93 of Belleville passed away on Tuesday, September 10, 2019. Born in Italy, the daughter of Felice and Madalena (Micciola) Fabiano, she lived in England prior to moving to Belleville 45 years ago.

She is survived by her beloved husband, Alfredo Romano; her son, Felix Romano; 5 grandchildren, Vanessa Smith, Helen Flood, Vito Fabiano, Joanne Pergola and Marie Antonia Fabiano and her great-grandchildren, Joshua and Michael Flood, Joseph Pergola, Mia Teresa Farrell, Maxwell and Evelyn Fabiano and Marissa Farrell. Along with her parents, she was also predeceased by her children, Michael Romano and Teresa Fabiano.

The entombment will follow at Holy Cross Cemetery in No. Arlington.