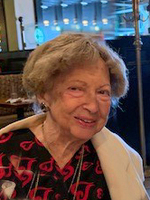 Marie T. Morrison, 88 of Belleville passed away on Tuesday, August 20, 2019. Born in New York, NY, the daughter of George and Fannie (Vozza) Paoliono, she was raised in Bronx, NY and lived in Belleville and Florida prior to returning to Belleville last March.
Prior to her retirement in 1992, she was a finance officer with Florida Atlantic University in Boca Raton. Previously she worked for Essex County College.
She was a former member of the Galileo Foundation of Newark, a volunteer at the American Cancer Society in Palm Beach County and a member of the Ocean View Dance Club in Lake Worth, Fl.

She is survived by her beloved husband, Donald Morrison; her son, Donald Vicaro and his wife, Angela and her grandchildren, Donald and Danielle Vicaro. Along with her parents, she was predeceased by her brother, Michael Paolino

The Funeral Mass will be celebrated at Holy Family Church in Nutley 10:30 a.m.