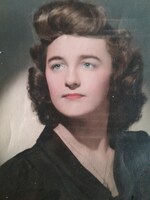 Marion was born on February 15, 1928 in Newark, New Jersey. She was the fifth of six children. She was married in 1949 to James Horan Jr. and had two children.

She was preceded in death by her husband, James Horan Jr. and her brothers, Joseph Tirpak, Michael Tirpak, John Tirpak, and George Tirpak.

She had a passion for life but specifically she loved gardening, cooking, watching the Yankees, playing scrabble, word puzzles, knitting, and caring for all animals. She was the life of the party and made an impression on everyone she interacted with.

She graduated from St. James Commercial High School in Newark, NJ in 1945 and attended Brookdale Community College part-time in the 1970’s.

Services will be private, however a memorial service will be planned for this time next year to celebrate her life. S.W.Brown and Sons in Nutley, NJ is handling the arrangements.

Contributions may be made to Bloomfield Animal Shelter