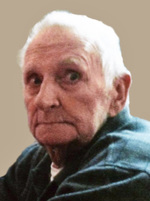 Raymond N. Simmons, 90 of Clifton and formerly of Nutley, passed away on Friday June 14, 2019 at his home. Born in Nutley, he was the son of the late Vincent and Frances (Kucinski) Simmons. Mr. Simmons was a self-employed distributor for Dairylea Dairies before retiring and had previously been employed with Cerami Dairy.

Ray is survived by his beloved wife, Rose Marie (Dente) Simmons; his son, Raymond N. Simmons, Jr. and wife, Julie, and his daughter, Mary Frances Simmons-Fallucca. He also leaves his grandchildren, Raymond N. Simmons III and his wife, Melissa and Jenna Simmons and his great-grandchildren, Brooke and Kyle. He was predeceased by his son-in-law, Brian, his brother, Martin Simmons and his sister, Dorothy Villa.

Raymond was an avid bowler, golfer and fisherman…all of which he very much enjoyed passing onto his beloved grandchildren.

The Funeral Mass will be celebrated at Holy Family Church in Nutley at 10 a.m.

Visitors will be received at the funeral home on Monday from 4-8 p.m.