To share your memory on the wall of Richard Hruska, sign in using one of the following options:

Provide comfort for the family of Richard Hruska with a meaningful gesture of sympathy.

Richard Hruska, 94 of Cedar Grove, NJ passed away peacefully on October 1, 2019. He was born and raised in Hillside, NJ, the son of Anton and Ethel (Porkert) Hruska. Richard was an Army Air Corps Ve... Read More
Loving Husband, Father & Grandfather

Richard Hruska, 94 of Cedar Grove, NJ passed away peacefully on October 1, 2019. He was born and raised in Hillside, NJ, the son of Anton and Ethel (Porkert) Hruska. Richard was an Army Air Corps Veteran of World War II having served in the Pacific Theatre of Operations.
He was Purchasing Director of Purolater Products and Mosler, Inc. before retiring in 1992.
Richard was an avid golfer who was aa former member of the Upper Montclair Country Club and the Manasquan River Golf Club.

He is survived by his devoted wife of 68 years, Elizabeth (Kesolits) Hruska; his son, Richard; his daughter, Debra Zinicola and 3 grandchildren, Peter and Andrew Zinicola and Lydia Hruska.

To plant a memorial tree in honor of Richard Hruska, please visit our Heartfelt Sympathies Store.

We encourage you to share your most beloved memories of Richard here, so that the family and other loved ones can always see it. You can upload cherished photographs, or share your favorite stories, and can even comment on those shared by others. 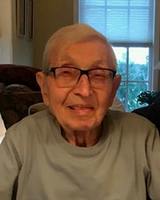