To share your memory on the wall of Theresa Nardone, sign in using one of the following options:

Theresa A. Nardone, 85 of Nutley, passed away Monday, August 17, 2020. Born in Newark, Theresa lived in Belleville prior to moving to Nutley 58 years ago. She was the daughter of the late Wil... Read More
Beloved Wife, Mother, Sister, and Grandmother

Theresa A. Nardone, 85 of Nutley, passed away Monday, August 17, 2020. Born in Newark, Theresa lived in Belleville prior to moving to Nutley 58 years ago. She was the daughter of the late William and Anna (Kane) O’Flaherty. She retired as an order processor for Pathmark Supermarket in Belleville.
Theresa enjoyed bowling and was a part of the Brunswick Lanes, bowling Wednesdays and Fridays. She was an avid NY Yankee fan and was a contestant on the original Jeopardy program in NYC. She enjoyed sharing the story of when she met and spoke with Frank Sinatra.

The beloved wife of the late George Nardone, Theresa is survived by her daughter, Virginia (Ginny) Cocchi and her husband Anthony; sister, Maureen Groseclose; and 3 grandchildren, Daniel Cocchi, Anthony Cocchi and his wife Nidaa, and Emily Nardone. She is also survived by Darlene Cocchi and many loving nieces and nephews. Along with her parents and husband, Theresa was predeceased by her son George Nardone, sister Catherine Horan, brother William O’ Flaherty, and her companion Donald Capanear.


Funeral service and entombment at Holy Cross Cemetery and Mausoleum in North Arlington were held privately.

To plant a memorial tree in honor of Theresa A. Nardone (O'Flaherty), please visit our Heartfelt Sympathies Store.

Receive notifications about information and event scheduling for Theresa

There are no events scheduled. You can still show your support by sending flowers directly to the family, or planting a memorial tree in memory of Theresa A. Nardone (O'Flaherty).
Plant a Tree

We encourage you to share your most beloved memories of Theresa here, so that the family and other loved ones can always see it. You can upload cherished photographs, or share your favorite stories, and can even comment on those shared by others. 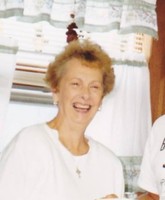