To share your memory on the wall of Vincent LaBruzza, sign in using one of the following options:

Vincent also went by Jimmy by his close friends and family, in addition he was nicknamed “Buzz” by his combat unit in Korea.
Dad grew up in Nutley, NJ in the house his Father built on San An... Read More
Loving Husband, Father & Grandfather

Vincent also went by Jimmy by his close friends and family, in addition he was nicknamed “Buzz” by his combat unit in Korea.
Dad grew up in Nutley, NJ in the house his Father built on San Antonio Avenue, also known as Nanny Goat Hill back in the 1920’s.
He lived thru the Great Depression and 2 Wars as a young man. At the age of 17 he enlisted in the US NAVY, serving on a destroyer the US Hawkins as fireman in the South Pacific Arena.
After WW 2, he was decommissioned and his time not finished in the military, the Korean War broke out. He was the inducted in the US ARMY Infantry 2nd Division 23 Regiment, Able Company. “Second to None”
He fought many battles and skirmishes while in Korea, but most notably the battle of Ol’ Baldy in the mountains of Korea. While taking on heavy casualties his unit continued to fight “holding the line “.
He found himself pinned down for 17 hours by grazing machine gun fire and heavy mortar fire. Fortunately, due to his faith in the Virgin Mary, his keen instincts he survived. Ultimately, a called in air strike with F86 SABRE jets firing rockets into the mountains allowing him to escape, he would say the jets were so low the pilot saluted him on the way in. He then met up with the remainder of his unit and advanced with a counterattack taking out Korean machine gun nests with hand grenades and Holcom the unit’s flamethrower to “clean out em out.”
Through these experiences he earned the prestigious Combat Infantryman’s Badge or (CIB), bronze star, Distinguished Service Metal from the State of NJ and Township of Nutley. Though he did not talk of the war in detail for years, he would get emotional when he did and sad for the loss of his friend’s on the battlefield 67 years later.
After the war he returned home and his goal was to keep his Mom, Dad and family together. Subsequently he purchased a home at 95 Hawthorne Ave, Nutley with his Sister Palma and Nancy to keep the family together.
Again his instincts proved correct as 95 Hawthorne Ave provided many family members with a “place to hang their hat” throughout the years. The house also served the nucleus of the family for years to come, where engagement parties, birthday parties, Memorial Day picnics, graduation parties all too place in the large backyard. His Dads fig trees and the beautiful weeping willow in the back where often the party centered around.
Soon after Dad met Rafaella and they married and had 2 children Robert and Anthony and resided @ 659 Belleville Avenue. Rafaella became his rock would tell him as he left for work at Sears, “Jimmy remember your #1 “.
Dad worked for Sears Roebuck for 35 years starting in appliance repair, management and settling in as Salesman in the Willow brook store Div. # 20. At Sears he was highly respected and liked a by all, he considered Sears his 2nd home.
Dad was a natural demonstration salesperson; he loved to demonstrate his products and was customer service focused. Again, Dad excelled and would often smash sales goals and service contract goals as well as being generous to share a sale if another salesperson was having a bad sales day.
Dad was an idea man he loved golf and attempted to open a golf school after Korea in the 1950’s. He always made himself available regardless of responsibilities, and never made excuses to his friends, family or work colleagues. He was always up for a “ride to AC” even in his 90’s where he still could pick a winner in the casino or handicapping a horse race, he always considered himself a lucky person and optimistic about life.
A person could not have asked for a better father, husband, brother or friend.
Finally, he always had the support of his Brother Sal, close friend Sandy and Tony Sellaro, Walt Vitacvich , Edwin Ace Aiello and Glen Rassmusson which he highly valued.

The beloved husband of the late Raffaela (Villani) LaBruzza, hs is survived by his loving children, Anthony LaBruzza and Robert LaBruzza and his wife, Vanessa; his granddaughter, Valentina; and his sister and brother, Nancy and Salvatore LaBruzza.
Along with his parents, Vincent and Mary (Scrudato) LaBruzza and his wife, Vincent was predeceased by his siblings, Mary DeBenedetto, Palma, Frank, Joseph and Gabriele LaBruzza.
Rest in Peace Dad: “Second to None”

The Funeral mass will be celebrated at 11am at Holy Family Church in Nutley.

The interment will follow at Immaculate Conception in Montclair.

Visitors will be received at the funeral home on Monday from 4-8pm.
Read Less

Receive notifications about information and event scheduling for Vincent

We encourage you to share your most beloved memories of Vincent here, so that the family and other loved ones can always see it. You can upload cherished photographs, or share your favorite stories, and can even comment on those shared by others.

Nancy, Sal, Gloria and Joey. purchased flowers for the family of Vincent LaBruzza.

Posted May 30, 2019 at 08:23am
Please accept our most heartfelt sympathies for your loss... Our thoughts are with you and your family during this difficult time. 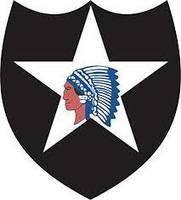 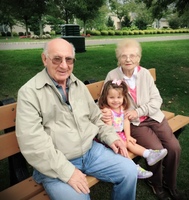 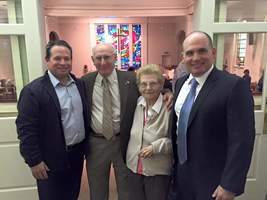