To share your memory on the wall of Emily Sarno, sign in using one of the following options:

Emily Sarno, 94 of Nutley passee away on Saturday, October 19, 2019. Born in New York City to the late George and Susan (Cangiano) DeGrassa, she grew up in Queens, NY before moving to Nutley several ye... Read More
Loving Wife, Mother and Grandmother

Emily Sarno, 94 of Nutley passee away on Saturday, October 19, 2019. Born in New York City to the late George and Susan (Cangiano) DeGrassa, she grew up in Queens, NY before moving to Nutley several years ago. Prior to her retirement she was a self-employed Casting Director.

The beloved wife of the late Jerry Sarno, she is survived by her loving sons John, Gerald, Bruce and Joseph Sarno, seven grandchildren and five great-grandchildren. Along with her parents and husband she was predeceased by her sister Laura DeGrasse.

Visitors will be received at the funeral home on Tuesday from 10 a.m. – 12 p.m.
Read Less

Receive notifications about information and event scheduling for Emily

We encourage you to share your most beloved memories of Emily here, so that the family and other loved ones can always see it. You can upload cherished photographs, or share your favorite stories, and can even comment on those shared by others.

Posted Oct 23, 2019 at 08:15pm
Dear Family of Emily Sarno,
I met Emily at St. Joe's, Cedar Grove, where my Uncle Rafael Wenke resides. She brought much joy to that place. I enjoyed a beautiful convesation with her many times and the last time was a week or more ago. She was always well dressed and looked great. I noticed this evening that she was gone, when I visited my uncle. I hoped she moved, but I checked the obituaries and was saddened by the news. She was unique and now I know why, she was a casting director. I wish she would have shared those stories with me. Please accept my deepest sympathy in your loss. I miss her already, the smile at St. Joe's.

Posted Oct 21, 2019 at 10:56am
Wishing you peace to bring comfort, courage to face the days ahead and loving memories to forever hold in your hearts.

Love Everlasting Bouquet was purchased for the family of Emily Sarno.

Posted Oct 21, 2019 at 07:30am
Thinking of the whole Sarno family at this time of loss. Sending our deepest sympathy. 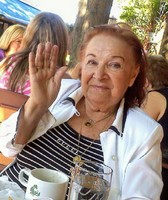