To share your memory on the wall of Michele Saporito, sign in using one of the following options:

Michele Saporito, 88 passed away on Monday, December 2, 2019 at his home. Born in Nutley, the son of Michele Saporito, Sr. and Christina (Coschigano) Saporito, he was a lifelon... Read More
Loving Husband, Father & Grandfather and Korean War Veteran

Michele Saporito, 88 passed away on Monday, December 2, 2019 at his home. Born in Nutley, the son of Michele Saporito, Sr. and Christina (Coschigano) Saporito, he was a lifelong resident of Nutley.
Prior to his retirement, Michele worked as a machinist for Westinghouse in Belleville for 37 years. He was a proud Army Veteran of the Korean War, a member of V.F.W. Post #493 in Nutley and the American Legion Post #105 in Belleville. He also raised pigeons in his spare time.

He is survived by his beloved wife, Thelma (Champignon) Saporito; 5 children, Michele Cantelmo and her husband, John, Christine Missaggia and her husband, Peter, Michael Saporito and his wife, Norma, Carolann Martello and her husband Robert, and Danny Saporito and his wife, Tracey; his grandchildren, Raymond, Michele, Danielle, Jenna, Kayla, Kristina, Michael Jr., Michael and Nicole and his sister, Jennie Casiello. Along with his parents, he was predeceased by his sisters, Mary Monto and Lena Torsiello and his brothers, Constantino and Joseph Saporito.

The interment will follow at East Ridgelawn Cemetery in Clifton.

Visitors will be received at the funeral home on Thursday from 4-8 p.m.

To plant a memorial tree in honor of Michele Saporito, please visit our Heartfelt Sympathies Store.

Receive notifications about information and event scheduling for Michele

We encourage you to share your most beloved memories of Michele here, so that the family and other loved ones can always see it. You can upload cherished photographs, or share your favorite stories, and can even comment on those shared by others.

We are so sorry for the loss of your grandpa. Our condolences and prayers to you and your family during this tough time. May this tree be a reminder of how amazing he was! 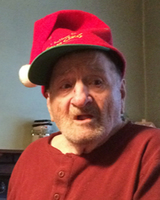